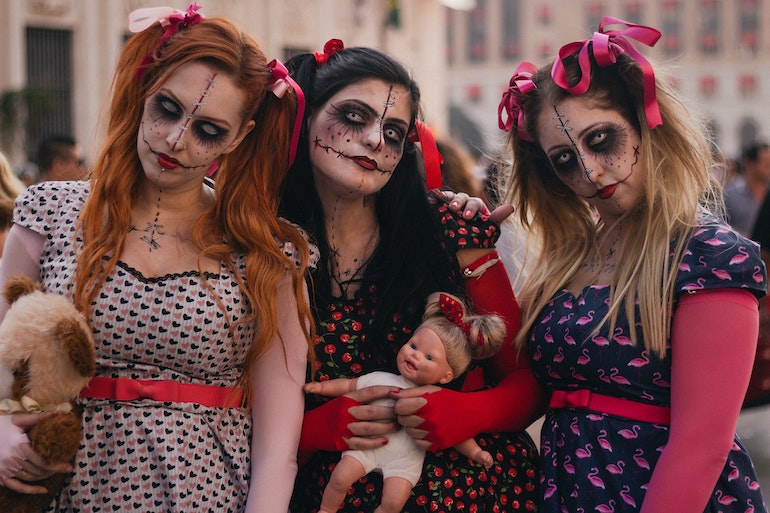 It’s spooky season, meaning there’s horror enthusiasts walking into haunted attractions in search of a fright all across the nation. Among them—Ph.D. student Abberley Sorg, though she isn’t interested only in the theatrics. She’s conducting field observations for her research on gender identity and performance in the haunted attractions industry.

There’s about 200 haunted attractions between Michigan and Ohio combined, she said.

“My goal this fall has been to visit as many haunts within a three-hour radius of my house as possible, which is a lot to get done in such a short window of time, but it’s also fascinating and a lot of fun!”

Sorg has been an avid horror fan since she was 8 years old and watched the edited-for-television version of Friday the 13th. She acknowledges it’s hard to put a pulse on why exactly she’s drawn to the genre.

“That said, as a sociologist I think what I enjoy most about the genre is the extent to which it has its heart, along with all its biases, on its sleeve.”

There was one bias in particular that struck Sorg early on.

“I’m disabled, and within horror, there is sort of this paradox of disability representation—you are far more likely to see disabled or disfigured characters in horror than anywhere else, but those characters are also almost universally portrayed as monsters.”

That got her thinking about how race, social class, sexuality and gender also play into “how our society builds monsters,” she said.

Historically, there have been studies on the allure of haunted attractions, even the controversies surrounding the use of sites of human suffering, such as prisons and asylums, as entertainment venues, she said. Very little academic work has been done from the perspective of the haunts and their haunters.

Sorg hopes to change that.

“I’m seeking to understand haunts not only as a place where people work, but also as a performance space where gender informs the rules played by haunt actors.”

What’s so sexy about zombies anyway?

What does Sorg look for when visiting a haunted attraction? The gender dynamics at play. Not only in how actors portray their characters, but their makeup and costume, the dynamic between characters, and the dynamic between actor and audience. She’s also taking into consideration location. How does the haunt narrative between an asylum differ from that of a slaughterhouse, for example?

Her fieldwork is in the preliminary stage, but a number of patterns are already emerging that mirror results she acquired during a content analysis project for one of her graduate classes. Sorg looked at 250 photos and media, analyzing what kinds of characters men versus women played, and the interactions between those characters.

She observed that women tend to play the victims or roles that are sexualized to some degree, like the sultry vampire, an alluring witch, or a “crazed” nurse that looks more goth than ghoulish. Sometimes they exhibit childlike qualities—a woman small in stature dressing up as a creepy little girl, talking in a high-pitched voice and playing with dolls, for example, Sorg said.

“As a society, we tend to view dangerous women as also being duplicitous, so it’s possible women are more likely to be cast in roles where they use their sexuality as a lure to bring men to harm,” she said.

“It’s a bit like the Halloween costume thing: the men’s costume is just ‘zombie’ but the women’s is ‘sexy zombie’.”

In comparison, men tend to play monsters that are overtly aggressive. They yell. Threaten. Block your path or charge at you, weapon raised. They are deranged doctors (rarely nurses), burly werewolves, and chainsaw-wielding madmen—a haunt staple.

“You could say, ‘Oh, that’s a vague reference to the Texas Chainsaw Massacre, he’s just playing Leatherface with the serial numbers filed off,’ but you also see smaller men in that position. ‘Well, you want the chainsaw guy to be a big hulking form so it’s scarier.’ Okay, but a lot of places have guys who aren’t big, scaring with a chainsaw, and there are plenty of big women out there.”

The chainsaw roaring toward your head is meant to be the scary bit.

Why women end up in the roles they do is the big question for Sorg.

The haunted attractions industry, like the horror industry in general, has long been dominated by men, Sorg said. There’s evidence this is changing, but haunters are routinely at the mercy of their employer’s biases, and what they consider to be acceptably scary.

Maybe actors are being placed in these roles “because that’s how the scenes at the haunt have always worked.” Maybe women simply decide they want to play a character who is both attractive and dangerous, she said.

No matter the reason, she’s curious to learn how society’s ideas about gender impact these choices. And she won’t find out by observing alone. She’s currently in the process of recruiting haunt workers to interview.

“Gender is a spectrum. You can’t know someone’s gender by looking at them. When making field observations, I’m often looking at the gender coding of the characters with the understanding that the actor might be a different gender than they appear to be presenting.”

Her hope is to include trans and nonbinary people in her interviews to get a better sense of how all haunters experience gender roles within the context of the haunt industry.

“Understanding the creative roles open to performers who work at haunts has the potential to offer insight into the relationship between gender and fear,” Sorg said. “In an environment where audiences are paying to see actors engage in playful, grotesque, and frightening violations of social norms, what kinds of monsters are women permitted to be?”