Ph.D. candidate James McQuaid investigates the queer history of the United Automobile Workers and discusses how their example sheds light on a path forward for the American labor movement. 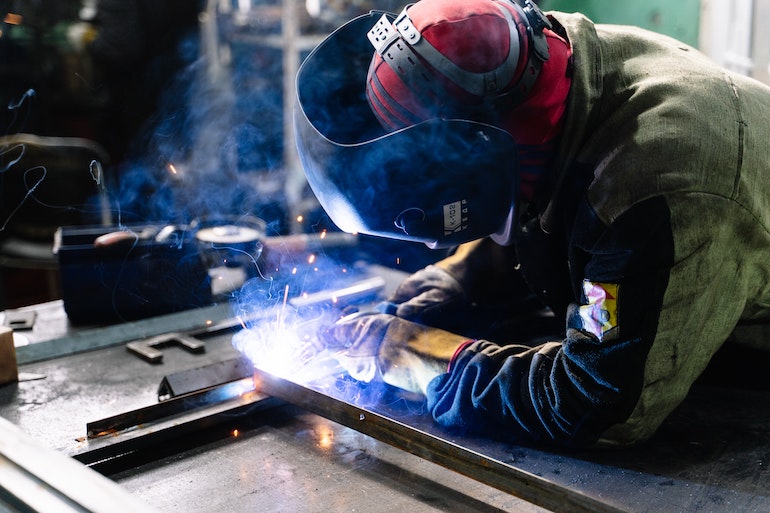 The LGBTQ+ labor history is a rich one and long one, though you wouldn’t know it by cracking open any old textbook. It’s this lack of representation that bothered James McQuaid, growing up as a queer person with an affinity for lessons of the past.

The stories that do exist in your average American classroom are often marginalized or presented as inconsequential. Even historians who do cover queer history tend to start their narratives with Stonewall in 1969, McQuaid said, “as if LGBTQ+ people just didn’t exist in the 1950s.”

It wasn’t until his undergrad at Grand Valley State University that McQuaid met a history professor who “talked about a LGBTQ+ past without apologizing for it.” That stuck with McQuaid. It had him thinking there must be so many more stories out there to be told. Though it wouldn’t occur to him for years that he could be a person who sleuthed and helped tell those stories.

He graduated from GVSU and worked in nonprofit management before deciding to return to school, this time at Wayne State

University as a graduate student in history. When he began the program, McQuaid had no intention to pursue research in LGBTQ+ history.

“It was still a subject that carried too much taboo for me, personally,” he said.

That changed during a graduate seminar with history Department Chair and Professor Elizabeth Faue. For his term paper, McQuaid thought about covering women’s resistance at GM auto plants in Lansing.

“Some of my first experiences with the labor movement and labor history were from when I would accompany my mom to her union hall (UAW 602) and help with oral histories they were recording ahead of the 2005 Oldsmobile plant closing there.”

He wanted to capture that history and discuss it in a paper. As his research started to delve more and more into sexual orientation and gender identity, “I started to get cold feet,” he said.

He contacted Faue, asking to change paper topics. While she told him it was ultimately his decision, she asked that he reconsider. After some deliberation, McQuaid decided to stick with his original topic. He went all in and was overwhelmed by what he discovered.

In the beginning, people told him “You’re not going to find anything,” or “If you do, there won’t be much,” but it simply wasn’t true, he said.

“As it turns out, just like there are a lot of LGBTQ+ people in American history who shaped the trajectory of our shared past, just as much can be said about the UAW and the American labor movement as a whole. We might not know about that history today for a number of reasons, but that doesn’t change the fact that that history exists.”

That seminar changed the course of McQuaid’s dissertation research. He went on to study the queer history of the UAW, starting with the union’s founding in the 1930s until 2000. What he’s found is that “unionists could prove incredibly inclusive of gender and sexual minorities, even when doing so could constitute political or economic liability,” he said.

And union support goes well beyond the UAW.

“Long before corporate floats at pride, in fact even before pride itself, unions like the Marine Cooks and Stewards Union (MCSU) were publicly fighting against ‘queen-baiting’ in the workplace.

“The first openly LGBTQ+ politician elected in US history, Kathy Kozachenko, won her seat on Ann Arbor’s City Council in 1972 as a third-party candidate, thanks to widespread union support.”

Currently writing his dissertation, he can’t count the number of hours he spent in the Walter P. Reuther Archives. He also draws from the work researchers have done before him and cites Miriam Frank’s Out in the Union and Rochella Thorpe’s research on Detroit lesbians as two particularly useful resources.

Nothing has proven more insightful than speaking directly with former unionists. There’s one story in particular that comes to mind when McQuaid thinks about the power of union solidarity.

In 1975 Ohio, Joni Christian returned to work at the GM Lordstown Assembly plant after going through a successful sex reassignment surgery. Christian was an openly trans woman who had told her supervisors about her surgery in advance, and yet she returned to a hostile work environment.

The supervisors started a whisper campaign against Christian, which led to a petition demanding she be barred from using the women’s bathroom.

“Christian’s representatives at UAW Local 1112 were furious,” McQuaid said. “They denounced the petition, insisted no action would be taken because of it, even if it gained more signatures, and began educational outreach efforts to make sure workers were more understanding and accepting of Christian.” 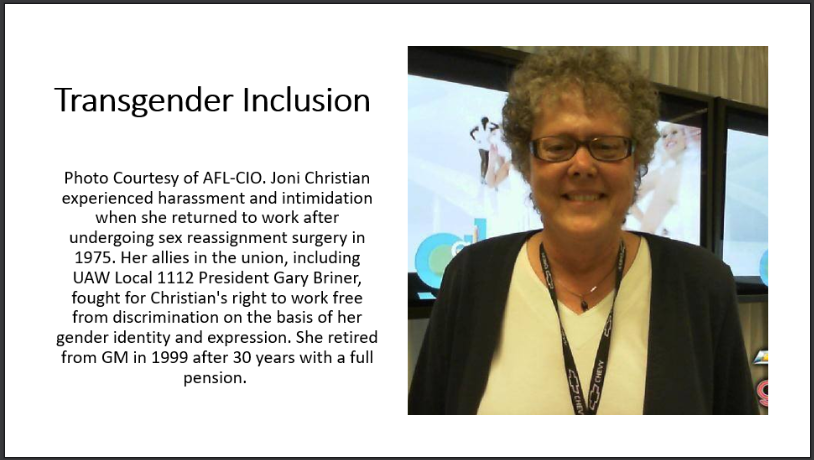 The UAW later helped Christian in a suit against GM for invasion of privacy that was successfully settled out of court. Christian went on to work at GM for another 24 years before retiring with her full pension and benefits.

Unfortunately, this isn’t every LGBTQ+ person’s story, but it’s a prime example of what can be achieved when employees unionize and work together, McQuaid said.

McQuaid acknowledges the road to progress is a long one. But stories like Christian give hope—a blueprint even to a more inclusive, not only labor force, but world.

“With a growing interest in the labor movement as a potential answer to today’s pressing problems—issues like access to healthcare, income inequality, global climate change, police brutality and racial terror—unions have the opportunity to regrow the labor movement as a social force that can give voice to the marginalized and oppressed everywhere,” he said. “The best way they will be able to do that, I think history and my research is proving, will be to include as many voices as possible in that rebuilding effort.”