School Leader at Cesar Chavez Academy Middle School April Hines-Jenkins talks about the importance of changing how and when we introduce students to STEM. 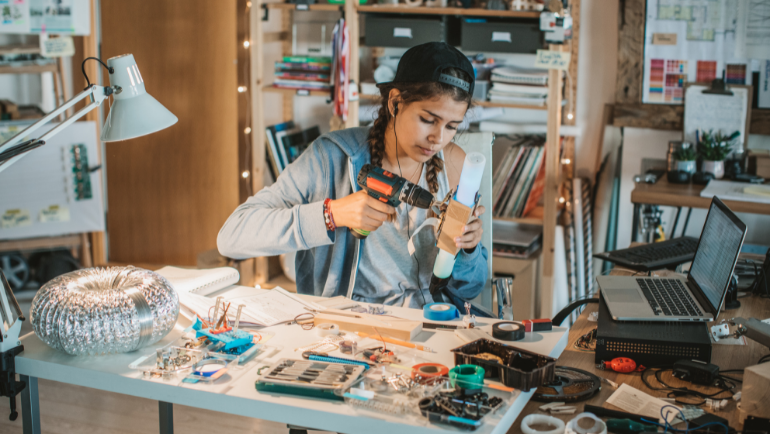 The science, technology, engineering and math (STEM) workforce has boomed in recent years, though people of color remain underrepresented in these areas. White workers hold 69% of all STEM jobs in the U.S. and current trends in STEM degree attainment among Black and Hispanic adults remain low.

Part of the problem, says April Hines-Jenkins, is that by the time students graduate high school, it’s too late to foster an interest in STEM.

“You have to grab them early and pull them in that direction when they’re young,” she said, “show them that path.”

A doctoral student in educational studies at the Wayne State University College of Education and school leader at Cesar Chavez Academy Middle School in Detroit, Hines-Jenkins started out teaching middle school math at Hope of Detroit Academy in 2005 and turned down the offer of school leader twice at other institutions before ultimately deciding she could do more good outside the classroom than in.

“94% of my students at CCA are of Hispanic descent,” April Hines-Jenkins said. “Many qualify for free or reduced lunch and meet the criteria to be immigrant students. I know a number of them may never go to college because of their immigration status or financial need or simply not knowing their options.”

The latter she can control now by teaching her students about the opportunities higher education can afford.

“I wanted to pull my kids into twenty-first century learning and how do you do that without STEM?”

Gains for the brain

Hines-Jenkins hasn’t wasted a single minute since she became school leader in 2015.

One of her first orders of business: Moving around the school budget to allocate $500K to a new computer lab. Prior to its inception, the entire school had shared all of three computer carts.

“I have nearly 650 kids. Imagine each and every one of them taking the time to sign those laptops in and out.”

Now they have a designated space to learn, free of distraction where they can move around and have access to state-of-the-art technology.

The success of the computer lab got her thinking about what more hands-on STEM learning could do for her students’ critical-thinking and problem-solving skills.

She reached out to academic institutions across the nation pitching her idea of STEM lessons for her committed CCA students. Eastern Michigan University answered the call by donating funds and supplies and even introducing Hines-Jenkins to STEM101 founders who helped her launch a STEM101 program at CCA Middle School. Now the school has five 3D printers along with its own STEM lab for students to craft their creations.

“No offense to snap-it kits,” she said, referencing the go-to STEM toys kids utilize across the nation, “but they’re LEGOs. You snap pieces together; it’s designed to work. STEM 101 kits are designed for flaws. It's designed for you to figure it out.”

Hines-Jenkins recalled a lesson she conducted with students over Zoom at the height of the pandemic. Each student had a kit mailed to their home with all the parts for a small speaker and they put them together, piece by piece.

“At the end, there was a variation in sound. Not every speaker was as clear as the others.” Why? A gap in the coils, she said. The wider the gap, the fainter the sound. “It gave them the opportunity to brainstorm a solution. A kid found some aluminum foil in the house and wrapped it around the coils, amplifying the sound.”

You don’t get that opportunity to innovate with a kit that comes with all the steps laid out, she said.

Hines-Jenkins’ advocacy for hands-on STEM goes well beyond CCA Middle School. She is on the board of Detroit Area Pre-College Engineering Program (DAPCEP), a non-profit that facilitates engaging curriculum for pre-K-12 grade students with the goal of increasing the number of historically underrepresented professionals in STEM careers.

She is also an integral part of a program supported by the Department of Defense in partnership with WSU to provide STEM learning experiences for underrepresented K-12 students.

The program launched in 2009 and was held on site at several Tribal Nation and Indian Reservation locations across the upper and lower peninsulas of Michigan and across the nation as annual summer camps until COVID-19 pushed the program online in 2020. The response to the change was so overwhelmingly positive that the camp format was adapted to offer DoD K-12 Super STEM Saturday once a month through June 2022 and continue the Summer Camp in a virtual format even if a return to traditional locations becomes possible.

“These are people who are on the cutting-edge of creation and bringing that next level of innovation to the world,” Hines-Jenkins said.

The Zoom platform that makes it all possible is coordinated by Sandra Yarema, Ph.D., Director of Undergraduate Studies & Teacher Certification Programs in the WSU College of Education, and Hines-Jenkins.

“Think about it—you have students here in Detroit who are talking to students in Arizona,” Hines-Jenkins said. “There are Native American students who in some cases have never left the reservation and yet are able to make connections across the country to someone like Eric Henson who is Native American and grew up on a reservation but took that next step and became a professor at Harvard.”

Programs like STEM 101, DAPCEP and DoD K-12 Super STEM Saturdays and Summer Camp connect students’ hard work and commitment to the real world, expose them to viable career pathways and introduce them to experts in those fields, she said.

Students went back to school at CCA last fall. Like most educators everywhere, Hines-Jenkins felt enthusiastic but uncertain about the return.

In that first term, she noticed those who had participated in STEM 101 at home excelled academically and socially, and the others caught on, asking to participate in turn.

That was her ah ha moment, she said, when she knew these lessons were doing more than preparing them for futures in STEM. And it’s only the beginning.