Anthropology student explores the promise, pitfalls of human-centered design in the auto industry

Human-centered design (HCD) puts the human perspective at the center of design and development every step of the way. In the automobile industry, HCD is an approach used for informing futuristic advancements such as artificial intelligence, autonomy and electrification—making vehicles smarter and better for the environment.

But who are the humans at the center? How are their perspectives measured?

These are questions Ph.D. candidate Michael Thomas has been asking long before he started his dissertation on the anthropological dimensions of design at Wayne State University.

Thomas began what would become a decades-long career as a designer in the auto industry at General Motors in the late ‘90s. Back then, his ideas of what made a good design were, by his own account, limited.

“I had the opportunity to go out on field exercises with a team of researchers, one of whom was an anthropologist,” Thomas says. “We traveled all over the country to study how people use trucks, the role trucks play in their lives, and the broader social context around work and family. It made me realize that what I was designing was informed by my own biases.

“I loved being a designer, but I didn’t know if I could even be a good designer until I got a better handle on the research.”

That’s why he pursued and completed a master’s in anthropology and later enrolled in the Ph.D. program at WSU. All throughout, he never quit working. Now senior vice president at Space Doctors, Part of InSites Consulting, Thomas previously worked as a research and design leader at Ford in the human-machine interface group, putting technology into a social context.

“Not a lot of work was being done in that space at the time. It was new and exciting.”

He lived in China twice, in 2015 and again in 2018, first to explore and help understand the market, later to build a team intent on developing and launching the Ford SYNC+ system in partnership with Baidu. 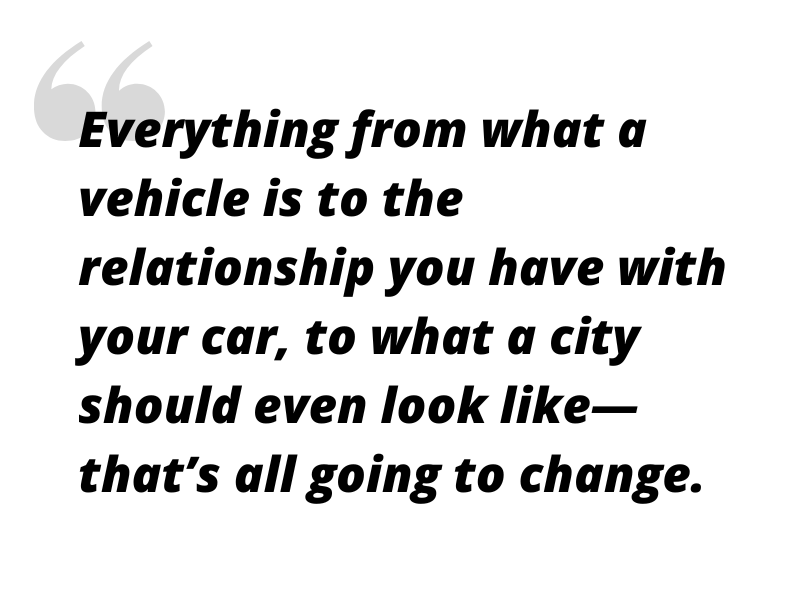 Then in 2019, a pilot program called Greenfield Labs in Silicon Valley merged with the User Experience group in Dearborn and together expanded to include five locations around the world in an effort to bring together a global team focused on human-centered design.

Thomas served as director of the Detroit research branch for more than two years.

“The big idea is really how do you build what is relevant and meaningful to people?” he says.

It’s the question at the center of his dissertation.

How human-centered design will shape the future

With HCD comes the promise of what the future can be, but to deviate from what has been the norm brings disruption.

“Everything from what a vehicle is to the relationship you have with your car, to what a city should even look like—that’s all going to change,” Thomas says.

It starts with human behavior. No longer does your car simply take you from point A to B—built-in voice technology can help you plan your day, its battery can act as a home generator, its autonomy can free up your hands and mind. Soon, manufacturers promise, you will be able to get to work and parallel park without ever touching the wheel.

It also reshapes urban development. Take, for instance, the construction of the power grid needed to accommodate the expected boom in electric cars within the decade.

“I think all these factors converge to say OK, this is a moment where there’s so much up for grabs,” Thomas says. “How do we take a deliberate and very intentional stance toward designing what the future could be?”

That’s where HCD comes in, but who are these humans at the center of design?

“Just like any other social activity, if you look at how it’s done in a particular geographical context compared to another, you’re going to find differences, both in the practice itself, and in the ways in which what it means to be human is understood.”

He says in some ways it extends from a critique described by three psychology professors from the University of British Columbia in their 2010 article “The WEIRDEST People in the World?”—WEIRD an acronym for Western Educated Industrialized Rich Democratic. They argue that much of what we understand about psychology is limited to WEIRD populations—hence a need for contextual anthropological inquiry.

“Measuring the desirability of a design in the West tends to be based upon an individual’s emotional reaction to some discreet experience. But the meaning of individual emotional responses is not universal. In some cases, design acquires meaning to the extent that it plays a semiotic role in crafting a narrative of what the future can be independent of value attached to an emotional response of an experience, as for example across some of the innovation work I’ve seen in China.”

Thomas’s dissertation research explores the limitations of HCD. He says, if nothing else, he hopes it gets human-centered designers questioning their assumptions about what makes a good design. For them to realize there’s nothing universal or absolute about a single perspective of what it means to be human or what constitutes progress.

By Kristy Case, web writer/editor of the Graduate School